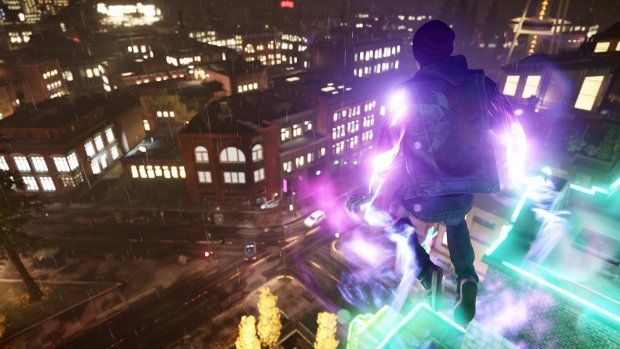 InFAMOUS: Second Son developed by Sucker Punch is the third entry in the InFAMOUS series which stars a new protagonist, Delsin Rowe.

The initial feeling is best described as rather surprising. Second Son starts with a very strong narrative, superb writing and the game does a great job on introducing the new characters. A few times I even felt as if the writing was up to par with the Uncharted series.

Sadly however, this does not hold. While the writing itself is pretty good, the excellence that you see in the intro does not last throughout the whole game. Infact, once you reach Seattle: the game loses some of its narrative focus and never quite manages to pick it up aside from perhaps once or twice. Personally I feel like this is a very common thing in games that offer a sandbox where the city is your playground. It leads to unfocused narrative and the gameplay becomes the main reason you play which is absolutely fine and perhaps even the norm when you think about video games.

Despite this, there is an interesting story that is told. One that draws parallels to the previous games in the series but also introduces some new takes on it all. It is without a shadow of a doubt that Delsin Rowe is by far the better protagonist when compared to Cole MacGrath.

Where Cole was somewhat tormented by his powers and rather dull about it: Delsin is relatable in that his powers and state are a joy to him. Who on their right mind would detest having super powers? Other than that, Delsin comes across as a better written character. For example, I went for the evil route in both prior InFAMOUS games because Cole just did not seem like the good guy and I did not care too much about him from the get go. Delsin on the other hand, was difficult. I wanted the good route for him despite making a particular different decision along the way. A decision that punished my progress which I later spent an hour making up for but still gave me the story I wanted for Delsin.

The karma system in general should be given some extra thought rather than plain good or bad. My friend pointed this out and while I never had a problem with it in prior games: it became much more evident for me, here.

This is quite possibly the best looking game that I have seen on consoles. I feel that it surpasses Killzone: Shadow Fall and it does so while being a game that is set in a sandbox world. Everything from the image quality to the texture work and lightning is astonishing and it quite honestly feels as if I am playing a bullshot from the moment you boot up the game. I would even argue that the game is worth checking out for the graphics alone. There is some addiction to be had in just walking around seattle and grabbing screenshots with the console. There is so much detail in the city from reflections to neon signs, its truly beautiful. If Sucker Punch is able to accomplish this then I am sure the likes of Naughty Dog will melt our faces. Even the animation work including the facial animations are superb. But what truly shines is the look of each power. I will not spoil the unknown ones but Neon for instance, is absolutely gorgeous.

The sound design is also another stellar point with this game. Each power feels unique and sounds unique. The way metal interacts as you make it collapse and hit the concrete, the way Delsin's chains sound when it comes in contact with enemies. There is also a general ambience felt in the city that truly adds atmosphere. Another strong point is the music which highlights the action even if there is only about one or two tracks that are somewhat memorable while the rest are dismissable.

The voice acting is also strong even if it is not entirely consistent. For instance, Troy Baker does a great job as Delsin and so do most of the main characters. However some side characters are a bit weaker in their delivery of lines. A rather minor complaint but still valid.

The bread and butter of the InFAMOUS series is its super hero gameplay. This is the reason we play InFAMOUS. Soaring in the sky while firing lightning bolts was fun even if it did not allow for too much variation. Bolts, rockets, grenades: It felt fairly similar.

Second Son is much different. Here you are given more than two entirely different powers that behave and feel different. Each power has a dash which is completely unique and makes traversal in the city be much more quick and fun. The general climbing has taken a downgrade due to this but if you are climbing in the game (outside of the early portion when you have to) then you are to some extent playing it wrong. While it is worth mentioning that the regular climbing is weaker, it is relatively unnecessary. Neon allows you to just sprint over any obstacle and climb any wall. Smoke allows you to get into vents which are strategically placed almost everywhere and instantly takes you to the rooftops.

Each power also has an individual feeling when you are doing something simple as shooting. Neon feels more as a sniper and is good for long distance precision shots whereas Smoke is the choice for up close and lethal confrontation. All in all the powers are much more varied and some are even outright ridicilously great in how creative Sucker Punch have been.

While the melee combat leaves something to be desired and can lead to a lot of swinging in the air while missing targets, the combat in Second Son is fun. More fun than any super hero game that I have played and I have played quite a few in my time. One complaint that I have would be that there was a lack of variety among the enemies.

There is also five additional hours of content along with a paper trail mini game which will add some gameplay value. I do however wish that there were more fleshed out side missions and that the user generated content from InFAMOUS 2 would have been in this game. Without it, the game feels a bit repetetive but when you are given such a variety in your arsenal: you can truly mix up your own playtime which makes the game all the more fun.

The game also offers some replay value due to the karma system which allows for a different ending and different power upgrades. What is rather unique is just how different the story is when you play it as evil instead of good. It is absolutely a difference worth playing for. While the city itself has atmosphere and looks absolutely stunning: there is some lack of life in it. But you can rarely tell since you are soaring in the sky, jumping from roof to roof. The truth is that there is something so addicting about just running around Seattle that I find myself losing track of time as a result.

InFAMOUS: Second Son is the pinnacle of the InFAMOUS series and it offers a great package which is truly needed for any PS4 owner. This is the game to get if you have a PS4.

Rebeca just played The Dark Pictures: The Devil in Me, and talks a bit about it.

Rebeca is exploring the showfloor at Gamescom 2022 in Cologne.

Moving from the public area at Gamescom to the more hush-hush behind-closed-doors portion, Rebeca talks a bit about some more games she's been playing.

Rebeca has played a lot of games at Gamescom 2022

Rebeca has been exploring the show floor at Gamescom 2022, and tells us all about it.

Jakob reflects on this years Gamescom.