"Well, Paladins esports didn't come from Hi-Rez initially. Paladins was first released into closed beta and became available for people to play if they were lucky enough to get a beta key handed out to them, or if they effectively bought into the closed beta with the Founders Pack purchase, which effectively unlocks every champion past, present, and future [...] then we saw players, after a while of playing, you know, grouping up as parties of five, as friends, actually start doing something quite remarkable. We had players so keen, right off the bat, to get playing at a competitive level, to try and test their mettle against each other, that we had parties of five queue up at the exact same time, they do a sync in Discord or Curse or Skype, and go 'three, two, one, queue', just as an attempt to queue snipe each other, and get into the same game, because at the time we didn't have custom lobby functionality [...] very quickly we added that in, because there was demand there."

"With Hi-Rez Studios and its approach to Paladins' esports, it's always been very much that there has been such a passionate drive from the players coming through at a core, which we have been more than keen to support. The drive and the real emphasis of this has always come from the players and, at least from my personal opinion (this isn't what represents the company) the only way to establish a strong esport is to have a strong grassroots foundation, where you have a passionate player-base that drives things forwards, and you have a big population to build on. You can try and make things big and you can try and blow things up and put a lot of money into it, but if the core drive from the players isn't there, well, you're going to be left a little bit wanting. And we've been so lucky with Paladins that we've created a game where these players have found a competitive environment in which they can thrive, and from the very get-go, they've been pushing and creating community tournaments, they've been just wanting to play at a competitive level or the joy of playing.

Now we have been able to support that to the best of our ability, starting off last year with the Paladins Founders Tournament which occurred between the two top European and North American teams after a series of qualifier events, and was hosted at DreamHack Summer, in Jönköping, Sweden, and was an absolutely phenomenal event, we had our first LAN champions [...] we [also] had a series of online events which eventually led up to the Paladins Invitational at Hi-Rez Expo of 2017, where we had eight teams from different regions all around the world [...] It was an amazing event, bringing all these players in from every single region that we could where we have our game, where we have a thriving competitive scene." 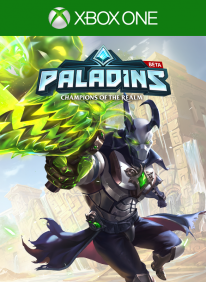