Fist of the North Star släpps i Japan under nästa år, här nedan under bilden har vi saxat ur all information 2018.

Eden, the City of Miracles - A city with an inexhaustible supply of water and electricty from the giant dome-shaped old world relic overlooking the city. It has a circulation of currency, and even an entertainment district shining with neon lights.

Characters from the Original Work

Shin (voiced by Kazuhiro Nakaya, who voices Akira Nishikiyama in the Yakuza series) - Denshosha of the Nanto Koshu Ken martial arts style. He took Yuria from Kenshiro, and gave Kenshiro the seven scars on his chest.

Jagre (voiced by Kenta Miyake, who plays Yuya in the Yakuza series) - A man with overwhelming power who judges Kenshiro to be a monster. He imprisons Kenshiro in the dungeon of Eden.

Kisana (voiced by Miyuki Sawashiro, who plays the role of the blind woman in Yakuza 0) - The daughter of the founder of Eden. She listens to the voice of the people, and drafts and implements various policies. Some call her a "Saint."

The Evil King (voiced by ???) - A mysterious kenpo user. He rounds up an "Evil King Army" of bandits and repeatedly attacks Eden.

General Producer Daisuke Sato: "I wanted to make a Fist of the North Star unique to Yakuza Studio. When considering what would make the best use of that collaborative feeling, I thought it would be good for the Yakuza voice actors to play the Fist of the North Star characters. Takuya Kuroda's voice is very suited to Kenshiro."

Original Author Tetsuo Hara: "On that premise, I think Kenshiro's voice is suited to someone with a good body. Listeners can also tell when the voice is of someone with the same build as Kenshiro. Kuroda's voice is genuinely strong, and it is also nice that it bears resemblance to Yusaku Matsuda. I thought it was fate, or that I had met the ideal Kenshiro."

Kenshiro Voice Actor Takaya Kuroda: "Fist of the North Star is a very well known work, so I by no means want to destroy the image everyone has of Kenshiro, but at the very least I plan to do Kenshiro faithfully in regard to the author's vision."

Tetsuo Hara: "Concerning the game, I wanted it to be done in the worldview of Yakuza. Fist of the North Star will be 35 years old next year. If we don't adopt new energies from scratch, it won't be a game that people will love."

Daisuke Sato: "You can think of it as a mix of the Fist of the North Star and Yakuza worldviews."

Tetsuo Hara: "If it comes across on screen, in the art and such that we had fun making it, that we must love Fist of the North Star, then that's already fine for me." 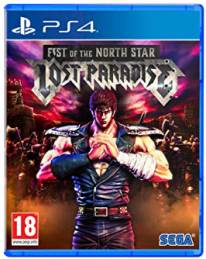