"I think it's a wonderful character that has been with us for like 22 years. She's become a great role model and I love the fact that she's been able to take such a big place as a female character in the gaming world and in cinema. I think there's definitely room for this character to evolve, and it felt like it came out in '96, and I think it reflects a strong woman with the same kind of essence still as a smart, very curious, feisty, vulnerable woman. It's almost like she has changed due to how society has changed, she has become more a woman of now, of the time."

Alicia pratar sedan lite om hennes första möte med Lara Croft som spelkaraktär:
"I was probably around 10-ish when I probably walked in - I didn't have a PlayStation at home, very sadly - and I walked into my friend's house and I remember that I saw the screen of the TV and I had never seen a female protagonist in a video game. I was really curious and I asked those older boys in that family if I could get a chance to play. I think I got to Peru and then there were some wolves and I just freaked out and didn't get to play more, but I did play the Anniversary version later on in my teens when that came out. Then I played the rebooted games before I started to do the film and realized then how time-consuming it is, but mostly ... when I grew up, I was a big computer games fan, a lot of point-and-click games like Broken Sword and Monkey Island, things like that. I was very aware of Lara and also due to Angelina Jolie and her films." Länk

Rise of the Tomb Raider: Baba Yaga: The Temple of the Witch

Rise of the Tomb Raider

Rise of the Tomb Raider släpps till mac nu i vår

Rise of the Tomb Raider i virtual reality till PC

Rise of the Tomb Raider 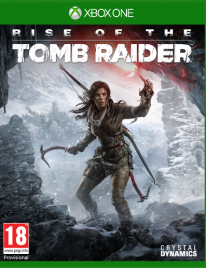 Enslaved: Odyssey to the West

Shadow of the Tomb Raider

The Last of Us: Part II

The Last of Us

Prince of Persia: The Forgotten Sands